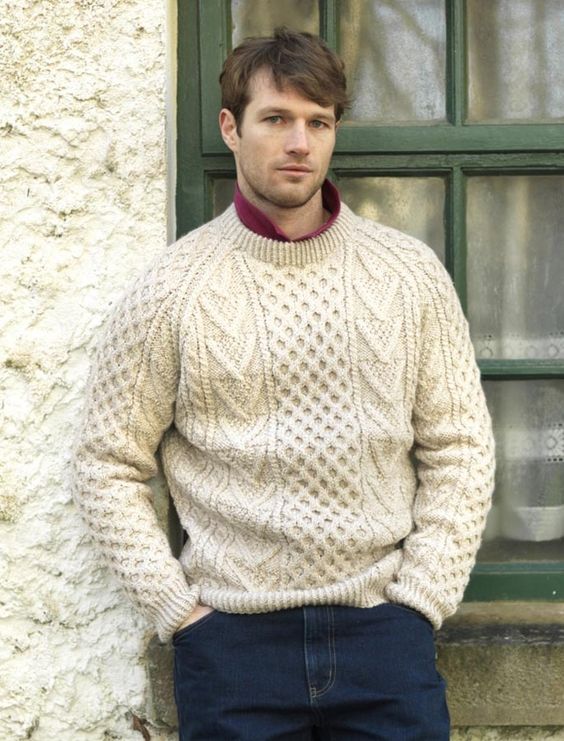 Many legends surround the beautiful Irish Aran sweaters with their elaborate braided patterns. The fact is: At first it was just a fisherman sweater. That is, the sailors needed them to be protected from the icy wind and water on the high seas. They were knitted from sheep's wool and the wool fat even kept the wet out. Originally it is said to have been the sailors themselves who knitted the artistic patterns! This is because the individual patterns had mystical meanings and were intended to protect sailors on their perilous voyages through all storms and bad weather.

The rhombus or blackberry pattern actually represented the Holy Trinity. In other words, the 3 stitches that you combine into one and then create 3 new stitches from an envelope stood for God, Christ and the Holy Spirit. If you use this pattern for your sweater, you should have divine protection with you. The braiding patterns had similar mystical meanings, but above all they also represented the sail ropes and the various knots that a sailor had to master. The frequent zigzag pattern is said to represent the rugged Ireland that sailors wanted to return to. This is how the elaborate, often intricate braided patterns that are so much a part of the classic Irish Aran sweater came into being.

The first Aran sweaters were knitted from untreated, unwashed raw wool. This is particularly oily and could really keep the water on the high seas, which constantly lashed at the fisherman, away from the body. Even dirt could not penetrate the knitted fabric.
In fact, you could just brush and shake out the sweaters and they didn't have to be cleaned all the time. Of course, they also kept you perfectly warm, because the natural wool was good at storing body heat.
Freshly knit sweaters tended to be a bit dirty white or off-white, the longer you wore them, the whiter they became, but then they became less and less water-repellent. 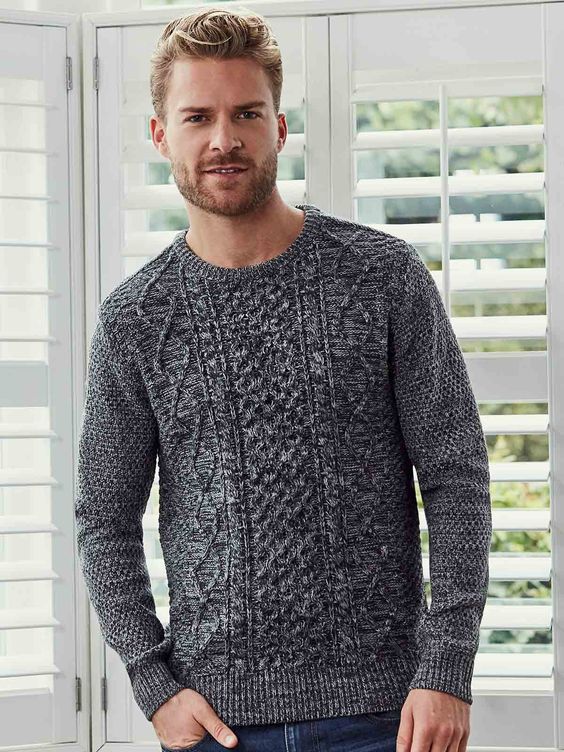 From the sailor jumper to the classic evergreen

As the name of the legendary sweater suggests, came into the world from the Irish Aran Islands. He first came to world attention in the 1950s thanks to an Irish band. From then on, women on the Aran Islands began to knit for the world market. In 1982 the book "The Complete Book of Traditional Aran Knitting" was published, which contains a whopping 71 different traditional patterns! A paradise for motivated knitters. The oldest and best-known patterns take up Celtic symbols and have lyrical names such as Honeycom, Tree of Life, Honeycomb, Cable Ladder, Basket Stitch or Blueberry Stitch.

Today, Aran sweaters are simply fashionable classics that suit every man and are loved by women as cozy sweaters. They just look very chic in traditional white or creamy white. They keep you warm in winter and can also be worn on cool days in summer.
The scent of the big wide world and the flair of great sea adventures always wafts around the male wearer of an Aran sweater. Women love the intricate, three-dimensional patterns, not only for wearing, but of course also for knitting yourself.

Knit your own Aran sweater

Aran sweaters can now be worn all year round. No matter whether big or small, old or young: everyone is happy about such a piece. There are many tutorials for fashion Aran sweaters, but you can also create your own patterns. Aran sweaters are usually knitted in a single color.What is possible, however, is to use a color gradient yarn from our Chiemseegarn range. The color gradient in these yarns is so gentle and harmonious that it doesn't look too restless when knitted into three-dimensional patterns.
Aran patterns can also be used for thinner summer sweaters, there are no fixed rules and laws. Even if the classic Aran sweater was white and made of thick wool. For the summer, it may also contain open, airy patterns.
Aran sweaters are a real challenge for inexperienced knitters. Experienced knitters love the complicated patterns and simply need new levels of difficulty over and over again.


You can find instructions here:

You can use this element to add a quote, content...